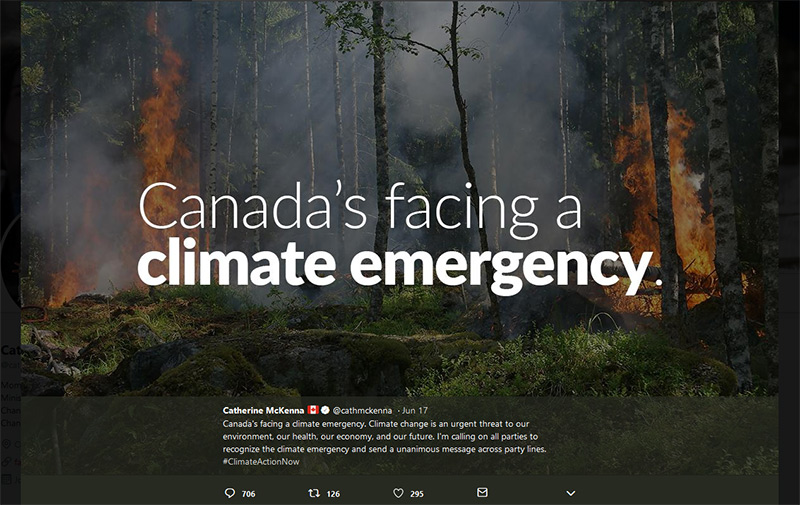 We are facing a #ClimateEmergency & it is the fight of our lives. Around the world, young people are calling for greater and faster #ClimateAction. Their voices should not & will not be ignored in our process at the @UN #ClimateChange conference. https://t.co/Mka6wAT6Iv #SB50Bonn pic.twitter.com/nbbCby62Gz

“We are in a climate emergency”

“That is just not possible,” she said, adding it would leave people sicker and result in battles over resources such as water and land, with coastal residents losing homes to rising seas. “We are literally in a climate emergency, and… we are increasingly hearing that this is the fight of our lives,” she said.”

→ Green Report – 14 June 2019:
António Guterres: The climate emergency threatens the security and stability of the world (article in Italian language)
“More and more wars in the world of sovereignties and the risk of a global nuclear conflict reappears.”

BREAKING: The House of Commons has just passed a motion declaring that Canada is experiencing a climate change emergency. It passed with support from the Liberals, NDP, Greens, and Bloc. Conservatives and Bernier voted against. #cdnpoli

“The House has voted to “declare that Canada is in a national climate emergency which requires, as a response, that Canada commit to meeting its national emissions target under the Paris Agreement and to making deeper reductions in line with the Agreement’s objective of holding global warming below two degrees Celsius and pursuing efforts to keep global warming below 1.5 degrees Celsius.” Forcing a vote on the motion meant all MPs had to stand up and be counted, whether or not they support Canada meeting the Paris targets.”

→ CTV News – 17 June 2019:
Canada’s House of Commons has declared a national climate emergency
“The House of Commons has passed a motion declaring a national climate emergency, and supporting Canada’s commitment to meet the Paris Agreement emissions targets. Conservative MPs voted against the motion, but it still passed 186-63 with the support of the Liberals, New Democrats, Bloc Quebecois and Green MPs.”

Yesterday, the Conservatives voted against declaring a climate emergency. Canadians expect leaders to take climate change seriously — but it's clearer than ever before that the Conservatives just aren't ready to join Canadians in this fight. https://t.co/pfJNkmeT0m

One second they declare a #ClimateEmergency and the next second they say yes to expand a pipeline.

This is shameful.
But of course this is not only in Canada, we can unfortunately see the same pattern everywhere…https://t.co/zVbWXnLBSQ

Two-faced Trudeau – One day his gov't declares a #ClimateEmergency the next it's recommitting billion$ to the #TransMountain pipeline. pic.twitter.com/h58VInSEO1

→ The Link – 8 June 2019:
Climate Activists Hold Town Hall for Green New DeaL
“A Green New Deal would be a dramatic transformation of the economy tackling the climate crisis and the injustices related to it”

“Hobart has become the first capital city in Australia to declare a climate and biodiversity emergency and demand urgent action. The motion passed last night eight votes to three, with Aldermen Tanya Denison, Simon Behrakis and Marti Zucco voting against it.
Lord Mayor Anna Reynolds says the declaration of an emergency reflects the concerns of the community. “Acknowledging that you have a really strategic problem for the future is more than symbolic, it’s about recognising that this issue is going to effect our operations and our community is incredibly concerned about the impact of climate change on the future of our city,” she said.
But Alderman Behrakis has described the council’s to declare as emergency as “hypocritical”. He says several of the councillors and aldermen who supported the declaration, also voted against an amendment showing support for a zero-emission power generation program.”

Call on the Australian government to declare a climate emergency 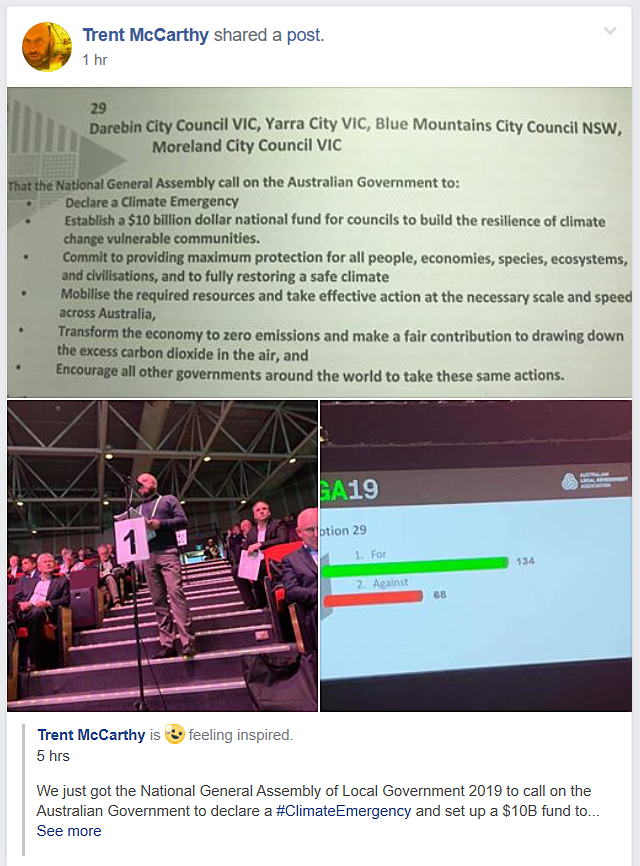 Darebin City councillor Trent McCarthy wrote on Facebook on 17 June 2019:
“We just got the National General Assembly of Local Government 2019 to call on the Australian Government to declare a #ClimateEmergency and set up a $10B fund to enable councils to build the resilience of climate change vulnerable communities. Thanks to Moreland Council, Yarra Council and Blue Mountains Shire for co-sponsoring Darebin’s motion and to the 134 delegates who voted for it.”


→ The Guardian – 3 June 2019:
We must mobilise for the climate emergency like we do in wartime. Where is the climate minister?
“A realistic assessment of climate-related impacts and threats depends on understanding the strengths and weaknesses of climate science projections. Unfortunately, much scientific knowledge produced for climate policymaking is conservative and reticent.” By Ian Dunlop and David Spratt

→ Sydney Morning Herald – 3 June 2019:
Time to flick climate emergency switch: a plea to our new Parliament
“A year ago, there was little discussion of climate change as an existential threat, or the corresponding need for emergency action. Today, in the face of rapidly accelerating climate impacts, “existential threat” and “climate emergency” are common currency globally, existential meaning the potential to destroy humanity as we know it.” By Ian Dunlop

“We have three choices: to die, to survive or to thrive”

“At this point in human history we have three choices: to die, to survive or to thrive. From the wildfires in the U.S., coral die-back in the tropics and the deadly hurricanes battering small islands, the signs are crystal clear: climate devastation is already here. The world’s poorest people and indigenous communities are on the front line. They are also bearing the brunt of the sixth mass extinction, which is under way due to conversion of their forests, wetlands and other wild landscapes into concrete cities, dam reservoirs and fields growing soya.”
~ An excerpt from This is Not a Drill: An Extinction Rebellion Handbook, published by Penguin Books. By Farhana Yamin, an international environmental lawyer and activist with the Extinction Rebellion movement.

→ The Guardian – 15 June 2019:
We must transform our lives and values to save this burning planet
“The case for action to tackle the climate emergency, on a scale far beyond anything that has yet been attempted, is increasingly widely understood.”

→ Inequality – 15 June 2019:
Global Inequality in a Time of Climate Emergency
“Our world’s richest have a great deal of money. They also have the power to decide whether our civilization sinks or swims. So what can we do?” 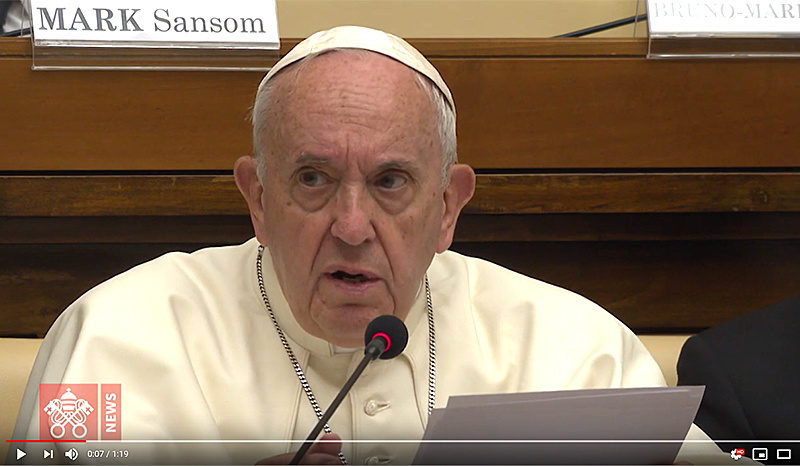 If there's one NZ writer on climate and environment whose work I look forward to reading, it's @weldangel2. Here's her latest piece in the @nzherald on the Zero Carbon Act and #ClimateEmergency: https://t.co/QBWh5Mmqtm @ExtinctionNZ @GreenpeaceNZ @GenZeroNZ #ZeroCarbonTransition

"While we’re sat up here on a giant oil rig, let’s clear up a few things… We don’t need more oil. What we need is a planet we can live on." @BP_plc needs to clean up its act. Fast.

Yes, oil bosses *should* be in crisis talks – and what they should discuss is the climate crisis.#ClimateEmergencyhttps://t.co/aG15W0ZPaa

"We are throwing everything, EVERYTHING at this; to stand between BP and the production of more fossil fuels than our climate can take." – @GreenpeaceUKhttps://t.co/suEtdWMk0Q #NoMoreOil #ClimateEmergency

“Everyone knows that our responses to climate change must be speeded up. While personal change is admirable, it is slow. The situation now demands very rapid, mostly technological, top-down changes,” writes Peter Harper #ClimateEmergency https://t.co/UvQeKYgZwT

NEW ZEALAND
→ TVNZ – 13 June 2019:
It’s time for NZ to declare a climate emergency, majority of Kiwis say in new poll
“Of those who were polled, 53 per cent answered yes, 39 per cent said no, and eight per cent did not know. Those who were more likely to agree that the Government should declare a climate change emergency were Green Party supporters, Pacific peoples, people aged 18-34, Labour Party supporters and Māori.”

→ Insurance Business NZ – 15 June 2019:
Climate emergency declared in Auckland
“Auckland City Council has become the latest to declare a climate emergency, joining Canterbury, Nelson, and Kāpiti Coast councils and other cities around the world that have formally recognised the urgency for climate change action.”

Today on BBC News – why Heathrow's greed should not come before the health of Londoners and our planet: #climateemergency pic.twitter.com/YwrHkD2hQX

GREECE
→ Greek Travel Pages – 5 June 2019:
Greek Green Groups Calling on Parties to Declare ‘Climate Emergency’
“Dozens of local environmental groups are calling on the Greek government and political parties to take immediate action and move swiftly ahead with the implementation of measures against global warming and are demanding a “climate emergency” be declared.”

Media coverage generated by the release of the Breakthrough policy paper on climate, security and risk by Ian Dunlop and David Spratt:

→ New Scientist:
Is it true climate change will cause the end of civilisation by 2050?

→ The Independent:
‘High likelihood of human civilisation coming to end’ by 2050, report finds

→ Adelaide Advertiser:
Civilisation will be under threat by 2050 if we don’t tackle climate change, report warns

→ Mirror: (UK)
Human civilisation ‘will collapse by 2050’ if we don’t tackle climate change

→ Science Alert:
Climate Change Could End Human Civilisation as We Know It by 2050, Analysis Finds

→ People:
The End of Civilization May Begin in Just 30 Years, According to a New Harrowing Report

→ Climate News Network:
Thirty years to climate meltdown – or not?

→ Alternet:
‘Existential’ risk of climate crisis could lead to civilizational collapse by 2050: report

→ Heute:
Researcher: Humanity is at its end in 30 years (article in German language)